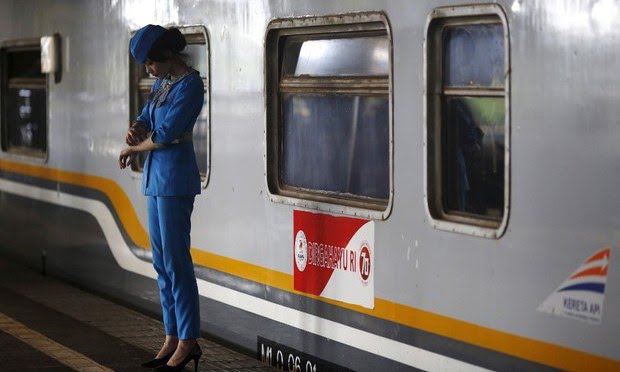 A train attendant awaits the departure of a train to Bandung from Gambir station in Jakarta in a file photo.Reuters

Indonesia will go ahead with plans to extend construction of the Chinese-backed Jakarta-Bandung high-speed railway to Surabaya despite Japan refusing to join the enlarged project, the investment ministry said Tuesday.

The government has offered China an opportunity to take part in extending the rail line to Indonesia’s second largest city and is open to other countries investing in this, said Jodi Mahardi, a spokesman for the Ministry of Maritime Affairs and Investment.

Tokyo had rejected Jakarta’s invitation for a consortium of Japanese investors to sign on for the extended project, saying it was focused on its existing medium-speed rail project connecting the Indonesian capital to Surabaya, Jodi said.

“They want to focus on the north line first,” Jodi told BenarNews.

The Japan-backed rail project traverses the north side of Java, Indonesia’s most densely populated and built-up island.

The Indonesian government, however, wants the high-speed railway to Surabaya to pass through the south side of the island. The government believes that an extension will make the project more economically viable, Jodi said.

Luhut Pandjaitan, Indonesia’s minister for investment, told Beijing last week that it could build the high-speed railway extension. He made the offer during a meeting with Wang Yi, the visiting Chinese foreign minister.

“President Joko Widodo has told President Xi Jinping that the PRC [People’s Republic of China] can participate in the project,” Luhut said in a statement on Jan. 14.

China will look into the project, Jodi said.

“A team of Chinese experts will be sent to conduct a study on the project,” he said.

“Basically, we are open to investors from anywhere, including Japan. They are still welcome,” he said.

Flagship One Belt, One Road project

“Even though we are experiencing difficulties due to the pandemic, we will still try to complete the Jakarta-Bandung high-speed train project according to schedule,” Antara, the Indonesian state news agency, quoted Ren as saying after a meeting in Beijing with the Indonesian ambassador to China.

The consortium building the U.S. $6-billion Jakarta-Bandung high-speed rail, PT Kereta Cepat Indonesia China (KCIC), said in December that the project was 64 percent finished, and scheduled to be completed next year.

The 142-kilometer (88.2-mile) Jakarta-Bandung line is expected to shorten the travel time between the two cities via rail to 40 minutes from three hours, according to Chinese state media.

Japan had initially planned to build the Jakarta-Bandung high-speed railway but Jakarta awarded the project to China after Beijing agreed to provide a loan without a government guarantee.

Launched by Jokowi in 2016, it is the flagship project in Indonesia under China’s controversial One Belt, One Road (OBOR), an estimated U.S. $1 trillion-plus initiative to build a network of railways, ports, and bridges across 70 countries.

Djauhari Oratmangun, the Indonesian envoy to Beijing, said both governments were committed to the project, which could pave the way for other investments by China.

“I hope that this project will be completed soon. When this project is completed, there will be discussions on next projects,” Djauhari said.

In 2019, Indonesia and Japan signed a deal on the outline of the 700-km (435-mile) Jakarta-Surabaya medium-speed rail project after two years of negotiations, with an initial investment of 60 trillion rupiah ($4.3 billion).

This project is expected to shorten the Jakarta-Surabaya train trip to five hours and 30 minutes, from more than 10 hours currently. Construction is scheduled to start in 2022 and finish in 2025.

As an emerging Asian power, China wants a greater role in Indonesia – the largest country in Southeast Asia – according to one observer.

“Japan and China … are trying to achieve hegemony in Indonesia. Of course, Japan doesn’t want [greater Chinese influence], because they’ve been investing here all along,” Yusuf Rendy Manilet, an economist at the Indonesian Center for Reform of Economics, a think-tank, told BenarNews, an RFA-affiliated online news service.

The government could still involve other countries in the project through a sovereign wealth fund called the Indonesian Investment Authority, which it launched this month, he said.

“If the government is successful in running the [fund], it could become an entry point for the financing of the high-speed train project,” Yusuf said.

In his view, South Korea could be a potential investor in the high-speed rail project.

“South Korea also has experience building high-speed rail lines. Apart from that, the current trend is that South Korea and Indonesia are in a honeymoon period in economic cooperation because a lot of new investment is coming from there,” he said.

Sun Jan 24 , 2021
By Kim Slowey California bullet train contractor Tutor Perini has taken the California High-Speed Rail Authority to task in a 36-page letter, calling its failure to obtain the necessary rights of way after more than seven years since obtaining approval for the project “beyond comprehension” and indicating that the $20 billion, 23-mile […]