The ceremony was held at State House grounds in Dar es Salaam on December 28, 2021, where the President of the Tanzania Samia Suluhu Hassan attended.

The contract represents an “investment in our four out of five ongoing or first phase of the rail development in the country for the construction of a rail standard system from Dar Es Salaam to Mwanza, totalling TZS 14.7 trillion [USD 6.4 billion],” the President said.

Currently, Tanzania is constructing the fourth phase of Tabora – Isaka rail lines and the second phase of Tabora – Kigoma is underway. The President has instructed Tanzania Railways under the Ministry of Works and Transport to complete procurement procedures to find contractors to build the remaining rail lines part of SGR 3.

“The transport sector is important and we are recognising that the construction of modern railways will bring the impetus to economic and social development in towards a better economy,” the Minister of Works and Transport Makame Mbarawa said at the signing ceremony.

Yapi Merkezi will be responsible for the construction of Makutupora – Tabora line which will be 368 km long of which 294 km represents the mainline while 74 km will be constructed as junctions and additional branches. The project is expected to be completed in 2025.

Sun May 1 , 2022
Milestone reached for the Regional Connector Transit project in Los Angeles as the construction of all the trackwork, guideway systems and station platform areas for the Grand Av/Bunker Hill Station have been completed. The entire transit project is now 90 percent complete. Following this achievement, Metro has begun train and […] 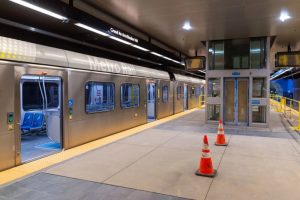