CAF will supply passenger trains for Etihad Rail, a state-owned company of the United Arab Emirates in charge of the administration and development of both the construction of the country’s railway network, as well as its management and operation. The volume of the contract exceeds 250 million euros..

As highlighted by the Beasain-based company, this new project, together with other recent successes achieved by the CAF Group as a supplier, places it in “a good position” for its participation in the various plans under way for the development of the network infrastructure that will connect the member countries of the Gulf Cooperation Council in the coming years.


Thus, CAF has signed an agreement with Etihad Rail to design, manufacture, supply and perform maintenance on passenger trains that will provide service on the UAE national rail network. The agreement was signed by Shadi Malak, CEO of Etihad Rail, and Josu Imaz, CEO of CAF’s Vehicles business, in the presence of employees from both companies in Sakamkam, in the city of Fujairah.

Under the terms of the agreement, the Basque company will manufacture, supply and maintain passenger trains, built to European standards. Each train will have a capacity for more than 400 passengers and will travel at a speed of up to 200 km/h.

Malak explained that the agreement is part of the activity that Etihad Rail is carrying out to improve passenger transport services. “It reflects the company’s continued commitment to the national strategic development that the UAE is currently undertaking, and which has among its main features a demanding schedule and the high standards used,” he noted.


Thus, he pointed out that the improvement of passenger rail services is “one of the three strategic projects of the National Railway Program”, and seeks to “improve the public transport system in the United Arab Emirates, improving the standard of living of the citizens and residents in the country, also complying with international regulations and the highest security standards”.

Imaz, for its part, expressed its gratitude for the confidence shown by Etihad Rail in choosing CAF for “the development of this important project”. “We are aware of its relevance within the plans that will mark the future development of the country’s railway sector, to which CAF wants to contribute with its experience,” he added.

The trains will be equipped with the “most advanced” technology, also adapting to the topography and climate of the United Arab Emirates, which is “key to guarantee high performance, efficiency and reliability” of the trains. The trains will also offer various services and entertainment during the trip and high levels of security.


By 2030, the number of passengers is expected to reach a volume of more than 36.5 million annually. These units will connect 11 cities in the United Arab Emirates from Al Sila to Fujairah, including the cities of Al Ruwais, Al Mirfa, Sharjah, Al Dhaid and Abu Dhabi, with a service that will allow customers to more efficiently plan their travel between the Emirates and the cities of the UAE, from the moment of booking your tickets until arrival at your final destination.

The trains for Etihad Rail will also feature charging points, as well as a wide catering offer, ample space between seats, as well as an advanced air conditioning system. There will also be different types of seats, which will include first class, business class and economy class.


The network’s locomotives incorporate the latest technology that reduces carbon emissions by 70-80% compared to trucks. Thus, a single train trip is equivalent to the emissions caused by the circulation of approximately 300 trucks on the road.

Etihad Rail has recently signed three memorandums of understanding with the Spanish national rail operator, Renfe, and the British companies High Speed ​​1 and GB Railfreight, to improve cooperation and exchange of knowledge, experience and best practices in rail services, both freight such as passengers, and railway operations.

Wed Jun 29 , 2022
In the context of the French Presidency of the European Union, the signature of the Memorandum of Understanding between the Community of European Railway and InfrastructureCompanies (CER), the Alliance of Passenger Rail New Entrants in Europe (ALLRAIL), the European Rail Supply Industry (UNIFE) and the Europe’s Rail Joint Undertaking (EU-RAIL), […] 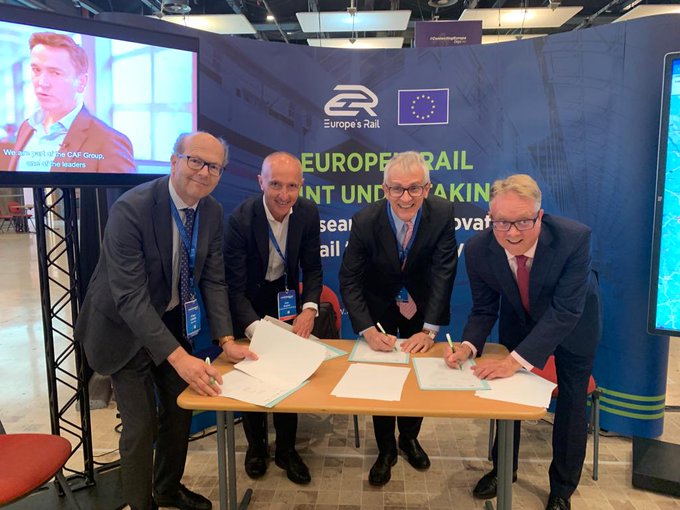