ISLAMABAD: Board of Investment (BoI) on Tuesday has claimed that an Omani group, which is interested in developing railway infrastructure in Pakistan, is ready to invest at least $2.3 billion on the 1,087 Km railway line between Gwadar and Jacobabad.

As per officials at the BoI, the disclosure of the foreign group’s intention to invest in the railway project was made during a meeting between them and Federal Minister of BoI Chaudhary Salik Hussain here on Tuesday.

During the meeting it was informed that the project that the Omani group is interested in investing $2.3 billion in the Besimah-Jacobabad railway line as part of Dr. Anwar Baluchi’s interest in Railway Infrastructure Development projects and power projects in Pakistan.

He identified the construction of a rail link from Gwadar to Jacobabad (track length 1,087 Km) and as a first tranche of financing; his company is ready to transfer $500 million to Pakistan for this rail link project.

Moreover, as per the officials the foreign company’s head also said that they can offer financing/loans for undertaking other projects too.

The Omani group was also ready to work together to improve bilateral relations and strengthen economic ties between the two countries.

While welcoming the interest shown by the group, Chaudhary Salik Hussain assured the delegate that they will be accommodated in every way possible.

He also assured the delegation of full support and complete cooperation. Salik Hussain said that he will facilitate and expedite the process of investing in Pakistan by the Omani company.

Over the decade since inception in 2011, AAI has focused on acting as a reliable partner for both multi national and regional customers alike. They work with governments, public listed companies, professional service providers and private project owners in several countries to make their courses easier to achieve significant contribution levels in the national and global marketplaces.

In his last visit to Pakistan, on January 11, 2022 he had signed a tripartite MOU with Railway Constructions Pakistan Limited (RAILCOP) and BIL Pakistan (Pvt) Ltd.

As per the MoU, the Railcop had prepared a feasibility report about the railway network. According to the feasibility report, prepared by Railcop, the country’s existing railway infrastructure is not equipped to sustain the massive load likely to arise upon completion of CPEC projects.

The existing network is composed of ML-1, which begins at Karachi and ends at Peshawar; ML-2, between Kotri and Attock; and ML-3, from Rohri to Taftan.

Dr Anwar on Monday has also held a meeting with Najam Saeed, the chief executive of Railcop, in Islamabad and discussed with him prospects for investment in more infrastructure projects.

The Railcop CEO drew the attention of the Omani investor to Balochistan’s rail network, saying the outdated system impeded trade between Pakistan and neighboring countries.

It may be added here that the China-Pakistan Economic Corridor aims to connect Gwadar port to China’s Xinjiang province through railways, highways and pipelines to pump oil and gas.

Wed Aug 3 , 2022
This construction of the SGR has inspired us a lot in Zambia, when we return home we will take concrete steps so that what has been done in Tanzania can be done in Zambia" - Minister of Transport in Zambia Hon. Franka Tayali 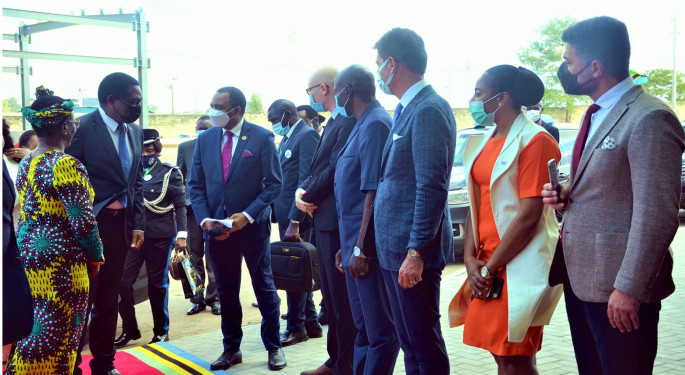