The T-MEC corridor will bypass Texas and go through New Mexico instead, according to a top Mexican official.
Ariana Garcia


Texas is losing out on a major trade railway worth billions of dollars in response to Gov. Greg Abbott’s recently rescinded enhanced safety inspections for commercial trucks entering the state through Mexico.


Mexican Economy Minister Tatiana Clouthier said the railway, known as the T-MEC Corridor — which will connect the Mexican port of Mazatlán to the Canadian city of Winnipeg — will now bypass the Lone Star State and go through New Mexico instead, according to the Dallas Morning News.

“We’re now not going to use Texas,” Clouthier said at news conference on April 28. “We can’t leave all the eggs in one basket and be hostages to someone who wants to use trade as a political tool.”

Abbott launched the 10-day-long enhanced safety inspections for trucks crossing the border on April 6 in response to the Biden administration ending pandemic-era Title 42 expulsions. While Abbott said the searches were necessary to combat human trafficking and drug smuggling, the inspections turned up neither.

The Republican leader ended the increased inspections after multiple governors of Mexican states bordering Texas agreed to step up border security on their end. However, the Perryman Group, a Waco-based economic analysis firm, estimated that delays caused by the additional inspections had already cost Texas $4.2 billion in gross domestic product. The delays also resulted in $240 million in spoiled produce.

In contrast, Abbott’s heightened security measures were actually quite lucrative for Santa Teresa, New Mexico as trucks facing delays at the Texas border were re-routed through the city at the time, according to the Dallas Morning News. Still, Abbott has threatened to reinstate the enhanced border inspections if Mexico doesn’t adequately address illegal immigration into Texas.

Jerry Pacheco, president of Santa Teresa’s Border Industrial Association, told the Dallas Morning News that Mexico still has time to reconsider as plans for the rail link are still in preliminary stages, but “the very fact that we’re being discussed in the early stages is a positive thing.”

India: Inside Details of Kochi Metro and Indian Railways Projects Launched by PM

Fri Sep 2 , 2022
“We are completely transforming Indian Railways. Today, railway stations in the country are also being developed like airports”-PM Modi 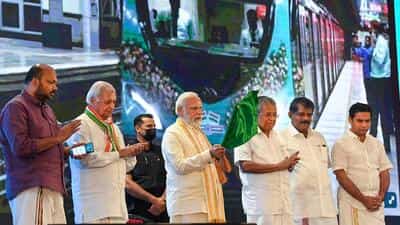