Several states have begun to employ unconventional means of conducting their relations with each other and improving their international image, such as sports diplomacy, climate diplomacy, and virtual diplomacy.

One of these means is railway diplomacy, a crucial tool in forging relations between states by creating a railway network for collective economic gain. A significant example is the GCC railway project, which is intended to link the six member states —Kuwait, Qatar, the UAE, Bahrain, Oman, and Saudi Arabia.

Railway diplomacy is not a new phenomenon, nor is the GCC railway project. It was announced in 2001 and approved in 2009, but after years of uncertainty and stalling it has gained traction since 2021, with the possible inclusion of non-GCC states. At their summit last December, Gulf state leaders approved the creation of the GCC Railways Authority with the task of bringing the project to fruition.

The first phase of the $15 billion, 2,200 km railway connecting Saudi Arabia, Oman and the UAE is now expected to begin operating in 2023. The second phase, linking Saudi Arabia, Kuwait and Bahrain is intended to be completed by 2025.

Despite the obvious benefits from this project, experts say it faces several challenges, and needs cooperation to ensure that regional interests should outweigh national ones.

Elsewhere, in 2010, Iraq said it was planning $60 billion of railway projects that would connect the Gulf to Europe through Syria and Turkey. Baghdad’s plans were derailed in 2011 by the civil war in Syria, but theproject has been revisited by the Gulf states and Turkey’s name is once again on the table.

Thanks to the normalization in Turkey-Gulf relations, there are now more talks on sectoral improvement in relations, including tourism, business, and infrastructure.

Including Turkey in the GCC railway project would benefit the Gulf states and create regional economic gains.

Basar Arioglu, president of the Turkey-Qatar Business Council, said last week that the GCC railway project could reach Turkey — which would link the Gulf states with Europe, the Middle East and China. Turkey and the GCC states have also been intensely engaged with the Belt and Road Initiative, China’s $1 trillion infrastructure and investment plan.

Railway diplomacy is not a new concept for Ankara, which is aware that it has become a crucial factor in foreign policy. In March, Turkey, Pakistan and Iran resumed the Islamabad-Tehran-Istanbul container rail service. In 2017, the leaders of Azerbaijan, Turkey and Georgia launched an 826 km rail link connecting the three countries, establishing a freight and passenger route between Europe and China that bypasses Russia.

Turkey also plays a crucial role in the China-Europe Railway Express, a network of rail routes launched in 2011 and mirroring the ancient Silk Road, through which Chinese goods are transported in containers to European consumers. A new route launched in December 2020 goes through Turkey, passing below the Bosphorus via Istanbul’s Marmaray tunnel. The route has benefited from Turkey’s construction and improvement of railways and other infrastructure.

Including Turkey in the GCC railway project would benefit the Gulf states and create regional economic gains. The railway could be transformative for the region, especially in a world of interdependence. It couldplay a significant role in enhancing regional connectivity and promoting commercial and economic activities in the Gulf region and even beyond. It is clear that in the future, railway diplomacy may flourish further,taking the train from the Gulf all the way to Europe.

• Sinem Cengiz is a Turkish political analyst who specializes in Turkey’s relations with the Middle East. Twitter: @SinemCngz

Sun Sep 25 , 2022
JOHANNESBURG – Transport minister Fikile Mbalula said the movement of goods needs to return to the railway in order to ease the pressure of trucks on the country’s roads. He was speaking in Pongola in KwaZulu-Natal at the scene of a fatal head-on collision between a truck and a bakkie. […] 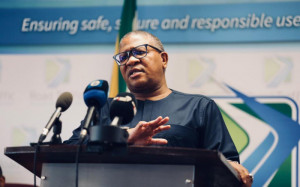