Construction of Lot 3 of Caransebes-Timişoara-Arad railway

•    Webuild consortium to upgrade, widen 14 kilometres of railway
•    Lot 3 part of one of most important railways in Romania
•    Part of project to connect cross-country railway to Rhine-Danube TEN-T Corridor
•    Contract to create 600 jobs, direct and indirect

MILAN, November 7, 2022 – Webuild and its consortium partners have won a €291-million contract to upgrade and widen Lot 3, a section of the Caransebes-Timişoara-Arad, one of Romania’s most important railways, to improve connections between Bucharest and the western part of the country, as well as the rest of Europe. Lot 3 belongs to a project to extend the Rhine-Danube Corridor of the Trans-European Transport Network (TEN-T), a European Union initiative to promote sustainable mobility, favouring rail over road for the transport of people and goods. Lot 3, which will have Webuild as leader of the consortium with a 72.1% stake and Salcef with 27.9%, is expected to create 600 direct and indirect jobs.

Commissioned by Compania Naţională de Căi Ferate CFR SA, Romania’s national railway company, on behalf of the Ministry of Transport and Infrastructure, the contract entails the design and construction of nearly 14 kilometres of a railway between East Timişoara and Ronat in western Romania. The work will modernise the single-track line to a double-track one. It will not disrupt rail service. The section, which crosses an urban area of Timişoara, will also include the construction of three stations, five bridges and four overpasses.

Financed by the Operational Programme for Large Infrastructure (POIM) for Romania, the entire project, of which Lot 3 is a part, aims to increase traffic speed and capacity along the Caransebes-Timişoara-Arad railway between Bucharest and Timişoara. Passenger trains will be able to travel at speeds of up to 160 kilometres per hour, while those for cargo by up to 120 kilometres per hour.

Elsewhere in Romania, Webuild is working on Lots 3 and 5 of the Sibiu-Pitesti highway, the first to cross the Carpathian Mountains. It is upgrading 120 kilometres of railway between Frontieră, Curtici and Simeria – a project split into three lots. It involves the construction of bridges, viaducts and the renovation of stations. Another project is the construction of the Braila Bridge over the Danube River. At 1,975 metres with a central span of 1,120 metres, it will be the second longest suspension bridge in continental Europe.

Thu Nov 10 , 2022
Minister of Construction and Transport Tanzania Prof. Makame Mbarawa accompanied by the Minister of Infrastructure of the Democratic Republic of the Congo – DRC Alexis Gusaro along with other leaders from the DRC have visited the SGR Station building in Dar es Salaam, November 2022. Prof. Makame Mbarawa has said that the […] 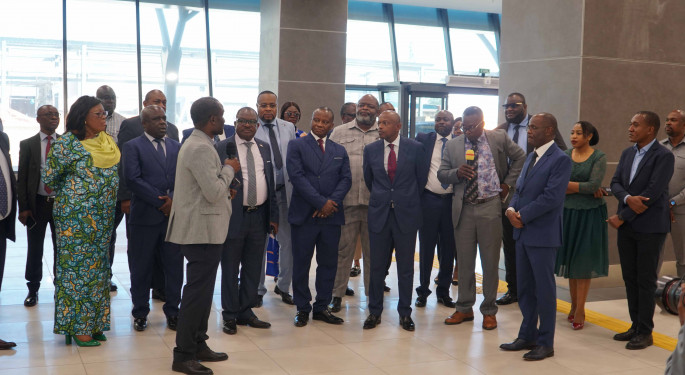