Introduction
The Rail Working Group is a not-for-profit organisation based in Switzerland representing directly over 70 stakeholders in the rail and rail finance sectors and indirectly, through member organisations, many hundreds of key operators in the rail industry. The majority of its members are based in the European Union and a list of our members may be found here https://www.railworkinggroup.org/about-us/members/.

Our primary purpose is to encourage governments to ratify the Luxembourg Rail Protocol to the Cape Town Convention on International Interests in Mobile Equipment. This is an international treaty under the sponsorship of UNIDROIT, the International Institute for the Unification of Private Law, and OTIF, Intergovernmental Organisation for International Carriage by Rail.

The Protocol will make it easier and cheaper for public and privately held operators in the rail industry to finance railway rolling stock, from locomotives, passenger and freight wagons to trams and metro trains It creates a new set of global rules for securing creditors lending with the collateral of rolling stock or leasing such equipment. The Protocol sets out a new enhanced set of rights for creditors, particularly in relation to debtor default or insolvency, and the creditor’s interest will be registered and searchable through the internet 24/7 at a public international registry to be operated from Luxembourg.

The Protocol will also introduce a new global unique identification system for railway rolling stock, of all types, which will make it easier for creditors to identify and, if necessary, repossess and remarket railway equipment, as well as facilitating real time tracking of the location, utilisation and status of railway equipment.

With the limited level of public finance available for rolling stock and the obvious societal and environmental benefits of increased transportation of goods and people by rail, the Luxembourg Rail Protocol will play an increasingly important role in the future in underwriting the growing need for private sector investment in rail, in turn supporting a vibrant, expanding and competitive rail sector.

The Protocol is expected to come into force in contracting states in the first half of 2023.

Within the EU, it has been ratified by Luxembourg and Sweden, as well as the European Union, and has been signed by France, Spain, Germany and Italy. Spain is expected to ratify imminently.

Work has been proceeding for some years on amending the “Basel framework”, the internationally agreed prudential standards for banks developed by the Basel Committee on Banking Supervision (BCBS), with the intention of revising the “Basel III” guidelines. It is anticipated that the revisions (“Basel IV”) will come into effect on 1st January 2025. They pose particular challenges to the asset finance industry.

The Rail Working Group strongly supports prudential standards for banks. Stability in the banking sector is critical to the business community – including the rail sector. However it must be recognised that any allocation of equity to credits given by banks represents a cost for those banks which in turn is reflected in the pricing of the credit. A higher risk weighting, means a greater allocation of equity, leading to an increased cost of funds for the banks, which cost is then passed on to their debtor and ultimately the consumer. This in turn constrains economic growth. It is vital therefore that a sensible and proportionate balance is achieved between ensuring that the banks maintain equity at a robust level against the risks borne by their loan books and providing credit to the business community at a reasonable price.

Lack of clarity and bias

The proposed rules and weightings applied to object-based financing (and project financing when this includes collateralised lending on rolling stock) are both unclear and unappreciative of the unique financial advantages of taking collateral on financed railway rolling stock, especially when asset financings are protected by a harmonised treaty system for security interests. Furthermore, there is currently a bias in the risk weighting framework towards those debtors whose financial condition and debt-servicing capacity enables them to repay debts without undue reliance on the specifically pledged assets.

Whilst private credit can be provided through secured loans, finance and operating leases, the development of an operating lease model for rolling stock around the world presents significant new opportunities for the rail industry and will allow it to compete more effectively with competing transport modes. The experience of the aviation sector shows that operating leasing of rolling stock will lower the barriers to entry, and make new equipment more affordable, for lightly capitalised operators as well as creating more operational flexibility, acting then as a catalyst for a more efficient, dynamic and competitive rail sector.

Given rolling stock will be far easier to repossess and operate across jurisdictions in the coming years, particularly if underwritten by international treaties, creating a mandatory high risk weighting for banks financing leasing transactions is both illogical and a strategic error. The criteria for making such determinations should approach the analysis and subsequent weighting of the various sectors within the transport industry with more care and distinction.

We believe that certain core distinctions must be made by the proposed rules upon implementation in order to reflect the real value and usability of railway rolling stock, the durability provided by the Luxembourg Rail Protocol, as well as rail’s central role in “building back greener” and reinvigorating various regions in Europe, post pandemic.

b. there are contractual, statutory or international treaty restrictions on the ability of the debtor/lessee to make changes to the asset which would have a negative impact on its value.

a. there will be an urgent need for private finance for the rail sector as economies rebuild in a sustainable way whilst public sector finance is limited because of budgetary constraints;

c. railway rolling stock is considerably more stable as a long-term asset class compared to aircraft and ships, with values being considerably more robust over the economic cycle and where, particularly in the rail freight sector, there is an integrated market with broadly standardised assets;

d. rail transport has a dramatically lower carbon footprint compared to the other two asset classes and shifting goods and people to rail is a key strategy, strongly supported by the European Commission and many European governments, in the fight against climate change and “net zero”;

e. the progression of a single European rail area, with the consequent need for significant investment in rolling stock, is a critical factor in economic development and regional integration across Europe;

f. new technology, such as hydrogen/fuel cell powered locomotives, will reduce the rail sector’s (and the community’s) dependency on fossil fuels, but these developments will need massive financial support from the private sector.

a. their rights will be underwritten by an international treaty;

b. the Protocol creates a common security system as the Protocol is adopted by various countries around the world, in turn largely eliminating the financial risks of cross-border operation of railway equipment and reducing legal and transactional costs;

c. (unlike aviation and shipping) it will for the first time introduce a public register of security interests in rolling stock; and

d. through the global system of unique identification of rolling stock, introduced by the Protocol, it will be easier for creditors to monitor, track and if necessary, repossess their collateral.

Conclusion
The proposed revision of Basel III will probably require banks to increase the level of equity allocated against loans. But we would submit that revision must take into account the enhanced security provided by collateralised credits for movable assets in object-based or project-based financings.

Further there needs to be a differentiated approach between different types of movable assets where the rail sector has historically low delinquency rates, assets have long useful lives and there are good economic, social, political and environmental reasons to encourage more private sector finance of rolling stock.

In addition, the
Luxembourg Rail Protocol, as it begins to apply across Europe and beyond, will significantly enhance creditors’ security and this must be recognised in the implementing legislation. Particularly when the Luxembourg Rail Protocol applies, secured financings of rolling stock must be allocated a ‘high quality’ status, regardless of debtor credit standing, thereby permitting banks to determine more favourable risk weightings.

Without this differentiation private sector credit for rolling stock will become significantly more expensive and the availability will reduce just at a time when more financial support from the private sector is urgently needed. This will increase the cost of rail transport for passengers and freight and therefore lower demand, to the detriment of the consumer, the community as a whole and our precious environment.

We strongly urge policymakers to modify the revision of Basel III to allow banks to differentiate between asset classes, to permit them to take into account, in assessing their risk weighting of credits, the additional security of the rolling stock as collateral and, in particular the significant benefit of the enhanced security provided by the Luxembourg Rail Protocol.

Sun Nov 13 , 2022
Portuguese infrastructure group Mota-Engil, partly owned by China’s CCCC, has signed an agreement for the concession of rail services and logistical support for the Lobito corridor, in Angola. Mota-Engil will manage the strategic infrastructure linking the Angolan coast to hinterland countries in consortium with Trafigura Pte Ltd. and Vecturis […] 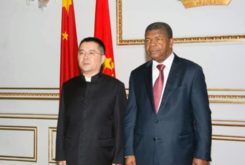