By The East African


This week’s order by Kenyan President William Ruto to revert cargo clearing services to the port of Mombasa could upset China and Uganda, the port’s biggest clients, and trigger anxiety among major players who depend on it.


The order, issued as President Ruto took office, is set to have far-reaching ramifications.

The key question is what China’s reaction will be, given that Kenya must still meet its end of the bargain on the standard gauge railway (SGR) cargo operation numbers and debt repayments.


But more importantly, will be whether port operations’ efficiency that has currently seen goods reach Uganda in a record four days after being offloaded at the Mombasa port will continue. The shortened time was due to the seamless systems that directly fed the SGR, and onwards to the Nairobi Inland Container depot and the Naivasha dry port.

Kenya’s move also comes as neighbour Tanzania steps up its efforts to connect the Dar es Salaam port with other East African countries through the Central Corridor.

Speaking on Tuesday in his first address to the nation after his swearing-in as the fifth president of Kenya, President Ruto defended his move to undo the policy of his predecessor Uhuru Kenyatta.

He said his actions were aimed at restoring thousands of jobs that had been lost in the logistics sector in Mombasa when former president Kenyatta issued an order for all cargo coming through the port of Mombasa to be hauled by the SGR, and cleared at either Nairobi or the Naivasha Inland Container Depot (ICD).

“This afternoon, I will be issuing instructions for clearance of all goods and other attendant operational issues to revert to the port of Mombasa. This restores thousands of jobs in the city of Mombasa,” said President Ruto on Tuesday. But even as cargo operations are ordered back to Mombasa, the question now is how Kenya will repay the SGR loan considering that the repayments will more than double in the financial year starting this July, when there will be increased payment of principal sums to the Exim Bank of China for the project.


Exim Bank of China funded 90 per cent of the $3.6 billion line from Nairobi to Mombasa.

Kenya’s Treasury projects debt repayments to Exim Bank of China will rise to $800 million in the next financial year, a 126.61 per cent surge from the revised $351.7 million budgeted for this year. Redemptions to the Chinese lender will increase to $605.16 million, from $174.98 million this year. Interest obligations will rise 8.55 per cent to $191.88 million, from 176.7 million, according to Treasury data tabled in the National Assembly.


According to the take-and-pay agreement, the Kenya Ports Authority undertook to consign to Kenya Railways a set volume of freight and cargo in order to collect adequate funds to pay off the SGR loan.

According to the latest data from the Kenya National Bureau of Statistics, in the first six months of this year, SGR recorded a total of $750 million in revenue. Some $610 million was for cargo volumes with revenue for the past five years totalling $4.6 billion. Passenger revenues were $760 million over the same period, an indication that SGR depends on freight to remain afloat.

In December 2019, then-president Kenyatta flagged off a cargo train from Nairobi to Naivasha, marking the start of operations at the Inland Container Depot. Soon after, he issued an order to evacuate onward cargo to Naivasha.

Kenyatta’s administration forced importers to use the SGR to ensure minimum guaranteed business to repay the $3.7 billion debt taken to build it. The directive saw the government transfer goods clearance to Naivasha, and enforced compliance, affecting thousands of workers and companies in the logistics sector in Mombasa.


The move was met by protests from Uganda and South Sudan, which are the main transit users of Mombasa port. They said then that Naivasha lacked adequate cargo handling facilities, thus making the cost of transport to their respective countries more expensive.

Long-distance cargo transporters also protested the directive, saying the government’s move would raise the cost of doing business, with the costs passed on to the final consumers of the imported goods. They moved to the High Court to have the mandatory directive rescinded and succeeded, but the government, through the KPA, appealed and the directive stood.

To date, an appeal challenging orders quashing the directive requiring all cargo to be transported to Nairobi and the hinterland exclusively through the SGR is yet to be determined by the Court of Appeal.

Last November, the appellate court suspended the execution of orders quashing the directive issued by a five-judge bench of the High Court, pending hearing and determination of the appeal filed by the KPA.

KPA argued that the directives were meant to operationalise the take-and-pay agreement, which is key to ensuring the loan for the construction of the SGR is repaid without any hitches.

In his campaign rallies in the run-up to the presidential election, Dr Ruto harped on the fact that the transfer of port operations to Naivasha was against the agreement made during the conception and construction of the SGR.

President Ruto said the Naivasha dry port was put up to benefit a few individuals, and dealt a blow to the economy of Mombasa.

But as the new order to revert cargo clearance to Mombasa takes effect, stakeholders now say it will be a blow to East African countries that use the port, and is contrary to the contract between Kenya and China on how to pay the loan.

“With the latest move by the current government, this means the Naivasha ICD where five EAC countries were last month issued with title deeds by former president Kenyatta, might cease to be lucrative. This means, the investment at the dry port, a facility on more than 1,000 acres, which is estimated to handle two million tonnes of cargo every year, will go to waste,” said Simon Sang, secretary-general of the Dock Workers Union.

“We are asking the government to invest more in Malaba and Busia borders to reduce congestion considering heavy traffic expected in the coming months,” he added.

Most of the cargo handled at the Mombasa port is destined for Uganda, Rwanda, South Sudan, Ethiopia, Burundi and the Democratic Republic of Congo, which accounts for 30 percent of imports and exports through there.

Last month, Kenya concluded the issuance of title deeds to five countries — Burundi, Rwanda, DR Congo, Uganda and South Sudan — to establish dry ports in Naivasha, despite their earlier reluctance to use the dry port as an alternative to Mombasa.

Then-president Kenyatta hosted the title deeds handing-out ceremony in Naivasha, where a special economic zone is being established. Uganda and South Sudan were offered land at the dry port in 2019, and since then have done little by way of putting up the necessary infrastructure such as cargo handling operations because of lack of a title deed as proof of ownership.

As the President Ruto directive is implemented, shippers say the seamless connectivity from the vessel to SGR to Nairobi or Naivasha reduced congestion, both at the port and also vehicular traffic along the Northern Corridor.

The Shippers Council of Eastern Africa (SCEA) chief executive Gilbert Lagat said the SGR idea was to fully connect port and border towns. This would be via both the SGR and metre gauge railway (MGR) to minimise costs.

Mr Lagat said the SGR and MGR shortened the time taken to evacuate cargo from Mombasa to Malaba by 62 percent, and costs by 58 percent.

“What importers consider is cost and efficiency. If the consignment reaches on time at the cheapest cost, that is what they will go for. The introduction of the railway is what we have been pushing for as it will give importers an alternative means of hauling their cargo considering bottlenecks associated with the Northern Corridor,” said Mr Lagat.

He added that the new railway had reduced cases of cargo loss as there is less diversion than is experienced with trucks.

The order by President Ruto will also derail Kenya Railway Corporation’s move to improve efficiency by connecting Mombasa and Malaba via rail. Starting this January, cargo from Mombasa port destined for Malaba was to be loaded onto the SGR to Naivasha, from where it would be transshipped onto the MGR line at the Naivasha ICD.

The freight train and connectivity, if successfully implemented, will take less than 40 hours to ferry cargo from Mombasa to Malaba railway yard compared with by road transport which takes 96 hours. It would also offer a cost reduction to $860 from $2,000 per container charged by road hauliers.


Also by collecting goods from the Naivasha ICD, importers from neighbouring countries will have reduced the distance covered by road hauliers by more than 400 kilometres.

Kenya chose to rehabilitate its 100-year old MGR from Naivasha to Malaba after it abandoned its bid to extend the SGR line to Kisumu, and on to the Ugandan border, after failing to secure a multibillion-shilling loan from China, which had funded the first and second phases of the SGR line.

Kenya Railway managing director Philip Mainga had said that the freight train has the capacity to handle 120,000 containers annually.

In December 2021, KRC gazetted promotional charges to haul cargo from Mombasa to Malaba at $860 for 20-foot container weighing up to 30 tonnes, while that above that cost $960. A 40-foot container above 30 tonnes was charged at $1,100, and those above were charged $1,260 without considering last mile cost. Since 2019, after the introduction of SGR freight train, transporters and container freight owners have been counting losses as all cargo ended up on the freight train to Nairobi and Naivasha.

As a result, container freight stations, which handled up to 95 percent of the cargo offloaded at Mombasa, were left to manage less than 10 percent of Mombasa-destined cargo.

According to the Container Freight Stations Association (CFSA), more than 4,000 workers lost their jobs since the launch of the SGR and introduction of the mandatory haulage of cargo by train to Nairobi and Naivasha ICDs.

“We had to let go more than half our workers as businesses struggle. All these job losses have happened at the Mombasa port as a result of the reduction in trucked cargo volumes,” said CFSA chief executive Daniel Nzeki.


Kenya Transporters Association condemned the government’s move to force importers to use the SGR saying it does not want to tell the public the hidden costs of using the cargo train to ferry containers.

“It costs $860 including value added tax to transport a 20-foot container to and from Nairobi using a truck but the SGR costs more than $920,” said KTA chairman Newton Wang’oo.

“The move by President Ruto is commended and now we want the executive order to be implemented immediately,” said Mr Mwanthi.

He added that the Naivasha Inland Container depot will remain a futuristic spot, and that “the government facilities should be left open to those willing to use them, and the government should make them efficient”.

Monitor. Empower Uganda.
We come to you. We are always looking for ways to improve our stories. Let us know what you liked and what we can improve on.

Sun Sep 25 , 2022
Leading rail CEOs from the Community of European Railway and Infrastructure companies (CER) have met with the European Commissioner for Transport, Adina Vălean for a productive exchange of views and strategic vision on a variety of transport related policy topics, with a particular focus on the impact of energy prices […] 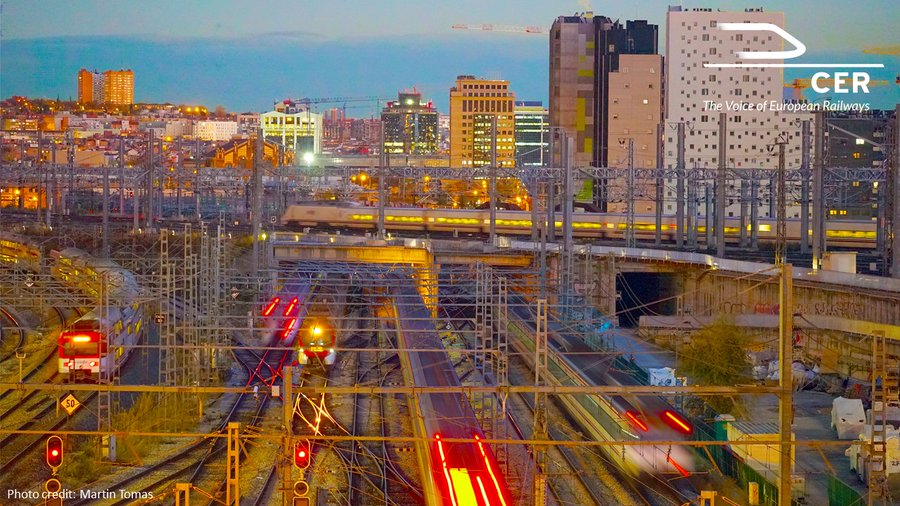