It is a fresh way to approach transport. Planning for improvements to the Buenos Aires commuter rail system began with a deep look at how people move within cities. This focus on passengers and their needs is a key priority for designing transport systems that promote greater and greener mobility.

In June 2022, the World Bank Board of Directors approved a US$600 million loan to improve the Belgrano Sur urban railway line in Metropolitan Buenos Aires, which serves some of the most vulnerable low-income neighborhoods in the Buenos Aires Metropolitan Area. Upgrades along the Belgrano Sur line include electrification, renovated tracks, the modernization of stations and surrounding areas, new vehicle underpasses, and pedestrian bridges.

This comes a little over a year after the World Bank approved a US$347 million loan for upgrades to the Mitre line, a commuter rail line linking Retiro station, in the central business district, to the suburbs in the north and west of greater Buenos Aires.

The two projects will deliver a better experience for all passengers by offering safer, faster, and more frequent railway service. In Buenos Aires, women rely more heavily than men on informal and public transport (50% versus 37%). And many more women, 72%, say they don’t feel safe on their commutes on public transport (though 58% of men say the same). Many of the upgrades respond specifically to these issues. New, brighter lights, security cameras, and emergency kiosks will improve safety for women, LGBTQ+ individuals, and anyone else who may feel insecure in a big public space. Following an extensive round of consultations, the project design also includes new ramps and signs to make it possible for people with disabilities to navigate the trains and stations.

In addition to benefiting travelers, this project also brings robust environmental benefits. Investments like this in public transport, combined with new bike parking, provide further incentives for people to ditch their cars to use public transport and increase active mobility. The project will also enable the Belgrano Sur line to transition from diesel to electric power, positioning the project in line with broader global goals to reduce greenhouse gas emissions from transport. Further, the upgraded infrastructure will be designed to withstand extreme weather events and other climate risks.

“In a major metropolis like Buenos Aires, public transport is an essential part of everyday life,” said Senior Infrastructure Specialist Veronica Raffo, who is leading the two projects. “The railway modernization programs that are currently underway will not only improve the experience of commuters, but will also contribute to the creation of a safer, greener, and more resilient urban transport system.”

These investments come at a critical time for mass transit in the city. While Buenos Aires boasts extensive public transport coverage—including some 800 km of suburban rail tracks and one of the world’s biggest bus networks, the last few years have taken a heavy toll on the system. Insufficient mass transit funding, along with growing urban sprawl, have been pushing more and more people to transition from public transport to private cars.

This has been aggravated by the COVID-19 crisis. Public transport hasn’t yet recovered from a steep drop in riders during the pandemic. Motorized traffic, however, is back to pre-pandemic levels. And since they are more dependent on public transport, this shift hits the poor hardest: fewer riders means lags in transport services, reliability, and even has implications for riders’ feelings of safety and security.

The railway modernization programs that are currently underway will not only improve the experience of commuters, but will also contribute to the creation of a safer, greener, and more resilient urban transport system.

Innovative and ambitious mass transit projects can help turn the tide. That is precisely the motivation behind the modernization of the Belgrano Sur and Mitre lines, where planners and engineers looked for broad and integrated ways to think about modern urban transport, climate change, gender equality, accessibility for all, sustainability, and efficiency.

“Climate action is at the heart of our railway programs,” said Liljana Sekerinska, a Senior Transport Specialist who is co-leading both projects. “Frequent and reliable rail service will give mass transit a competitive edge over private cars. Electrifying the two systems’ tracks will cut the use of diesel and help Argentina reach its nationally determined contributions under the Paris Climate Agreement. Improving railway infrastructure will make it more resilient to natural hazards, like increased rainfall, flooding, and heatwaves.”

Upgrades along the two lines will also address road safety. Level train crossings, which are places where a railway crosses a road without a tunnel or bridge, are a significant road safety risk. Between 2010 and 2019, the Metropolitan Area of Buenos Aires reported 40 fatalities on the Belgrano Sur line alone. Now, as part of the upgrades to the two commuter lines, vehicle crossings will be moved into underpasses, separated from rail tracks.

A more efficient, safer, and more convenient public transport system will better connect people to jobs, schools, healthcare, and more. Building greener, more weather-resilient railway infrastructure will also cut down on delays, ensure service continuity and benefit the environment. And lowering barriers to ridership for people in poorer neighborhoods, those with disabilities, women, and other vulnerable groups will make it easier for everyone to get where they need to go, when they need to go, providing ease of movement for all.

Wed Oct 19 , 2022
The 10km long railway project stretching from East to West would connect Africa with the Atlantic, the Red Sea, Middle East and Asia. 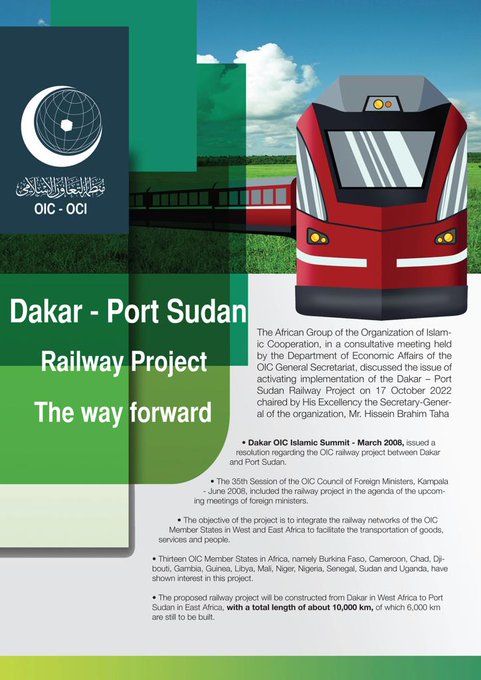