Japanese railway company, Tokyu, says it now uses only renewable energy to power its train operations. That means Tokyu’s huge network of train lines in and around Tokyo do not produce any carbon dioxide emissions.

Tokyu employs 3,855 people and connects Tokyo with the nearby city of Yokohama. It has more than 100 kilometers of railway tracks serving 2.2 million people a day.

It is the first railroad operator in Japan to have reached the goal of zero carbon emissions. It says the carbon dioxide reduction is equal to the yearly average emissions of 56,000 Japanese households.

“…The bigger impacts come from increasing electricity generation from renewable sources,” Little said. “The long-term battle is to increase production of renewable electricity.”

So, is Tokyu’s move to renewables just a campaign for good publicity? Or, is the company moving in the right direction for the environment?

There is no simple answer says one expert. Ryo Takagi is a professor at Kogakuin University and specialist in electric railway systems. He says bigger environmental gains would come from changing rural operations from diesel fuel to hydrogen power or switching to electric automobiles.

Tokyu’s action is better than nothing, but Takagi said, “I am not going out of my way to praise it as great….”

“We don’t see this as reaching our goal but just a start,” Kitano said.

Such steps are critical for Japan, the world’s sixth-biggest carbon polluter. The country has a goal of becoming carbon-neutral by the year 2050.

That is far behind New Zealand, for example, where 84 percent of power used comes from renewable energy sources. New Zealand hopes to make that 100 percent by 2035.

The renewable sources driving Tokyu trains include hydropower, geothermal-power, wind power and solar power. That information comes from Tokyo Electric Power Co., the utility that provides the electricity and looks at its energy sourcing.

Since Japan’s 2011 nuclear disaster in Fukushima, the country has shut down most of its nuclear plants and increased use of coal-fired power plants.

Japan aims to have 36 to 38 percent of its energy come from renewable sources by 2030.

Mon May 2 , 2022
An explosive device damaged a railway bridge Sunday in the Kursk region of Russia, which borders Ukraine, and a criminal investigation has been started. The region’s government reported the blast in a post on Telegram. Recent weeks have seen a number of fires and explosions in Russian regions near the […] 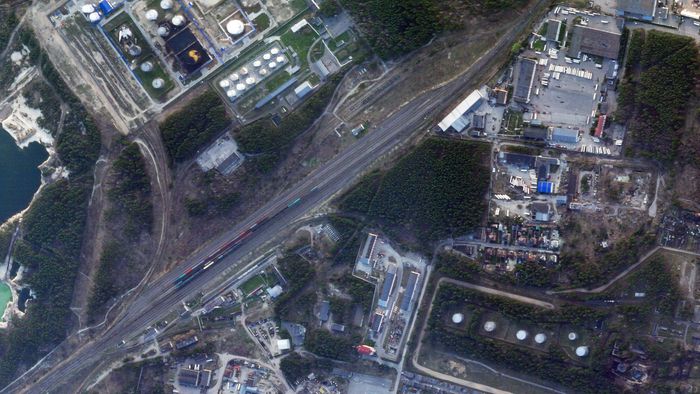